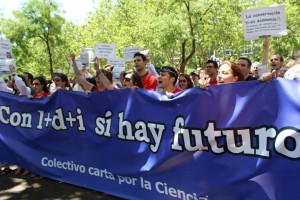 European science is dead! This is due to the lingering crisis that has stricken science’s investment and human resources, especially in Southern Europe. In those countries, the scientific community has been forced to stall research activities. Besides, the loss of employment opportunities at all levels, both tenured and non-tenured, is not allowing the much needed generational renewal at public research centers and universities.

Given that these countries’ dwindling and ageing research staff, the loss of several generations of researchers could have a very high social cost—the brain drain being only its most visible aspect. There are also collateral damages with long-term consequence: this situation does not create the conditions for young people to pursue science careers.

The European research budget has also been hit. Amounting, as it does, for approximately 10% of R&D investment throughout Europe, national governments should not count on increased return from the EU Framework Programmes to compensate the domestic cuts. European science requires a solid national funding base.

Science is the way out from the recession. Investment in R&D is correlated with the growth of the gross domestic product. It will help Europe continue to be a global cultural reference. It will also help to develop the tools to help maintain and improve the quality of life of its citizens related to health, education, environmental challenges, new sources of energy, new technologies etc.

It is no accident that the European countries that have been rescued or intervened are those that invest in R&D below the EU-27 average. In these countries, the austerity measures, imposed partly from Europe, are undermining a sector that can actually help them boost their economy.

The European Union will not be much of a union without a common ground of opportunities. The European scientific community should defend its integrity as a whole and not allow the dismantling of the R&D systems of some of its member states, negating their opportunity to achieve a knowledge-based economy, and condemning them to become paradises of cheap labour and sun.

Finding new ideas are needed to address the current difficulties affecting researchers is key, particularly in Southern Europe. This is the focus of a forthcoming event entitled homo scientificus Europaeus: seeking a sustainable future for European science, which is due to be held at the Ateneu of Barcelona, Spain, on 8 November 2013 at 12.30. It will bring together scientists from Southern European countries engaged in drawing a better future for European science.

We would like to make a call to all Euroscientist readers to join us at this event,  or to write to the Euroscientist Editor, to make suggestions on what needs to be done to follow the path towards recovery.

Amaya Moro-Martín is a researcher at CSIC in Madrid, Spain, and promoter of the grassroots Investigación Digna.

Both are members of the Euroscience Governing Board in Strasbourg.