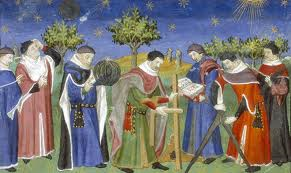 We like to think that we have moved on from the Middle Ages, but do universities from that period have something to teach us about the role of government in education? This column thinks so.

How does a new form of knowledge enter the public sphere and what are the consequences for economic activity? Today, thousands of students are pursuing university degrees in biotechnologies and computer sciences in order to enter the high-tech labour force or to become entrepreneurs. Do the institutions that train them generate economic growth? What roles can governments play in establishing educational institutions and supporting investments in the new forms of human capital they produce?

These are not new issues: around 100 years ago, the modern American research university – often supported by public funds – was taking shape, training scientists and engineers who were employed in the burgeoning industries of the early 20th century (Goldin and Katz 1999). Perhaps surprisingly, by going even further back in history – all the way to medieval Europe – we can learn important lessons about the relationships among public policy, educational institutions, educational content, and economic development.

The late Middle Ages saw a resurgence of economic activity in Europe (Lopez 1976). New cities were founded; old cities grew; the volume and the scope of trade expanded and reached new heights, both at the local level and across the continent (Figure 1 presents indicators of economic change in medieval Europe). Ultimately, this economic expansion changed Europe from a rural backwater (relative to Asia and the Islamic world) into an urban and commercial continent, arguably setting the stage for the subsequent projection of European domination across the oceans.

Around the same time, Europe’s first universities were established. In Bologna, in the 11th century, individuals from across Europe began to study the newly ‘rediscovered’ Justinian Code of Roman law. Soon, Roman law (among other subjects) was studied in dozens of newly-established universities. Graduates went on to work in secular and Church administrative roles, developing Europe’s legal and administrative institutions (Berman 1983) and strengthening the state’s capacity to tax and govern (Besley and Persson 1999).

New light on the Middle Ages

In our recent work (Cantoni and Yuchtman 2012a), we ask whether the emergence of a new institution of higher education – the university – played a key, causal role in generating the economic development of Europe in the Middle Ages. We also consider the role of new educational content – legal training – in this process.

To identify universities’ causal effect, we exploit a ‘natural experiment’ in university establishment: the Papal Schism of the 14th century. The Schism resulted from the election of two claimants to the title of “Pope”: Urban VI, who resided in Rome and had the support of the Northern Italian states and most of the Holy Roman Empire; and, Clement VII, who resided in Avignon, France, and had the support of the King of France. The split in allegiances led to the expulsion of students and faculty from the Holy Roman Empire who were based in French universities. This was a significant number: there were no universities in the region that is modern Germany prior to the Schism, so students and faculty from Germany often went to France.

The return of German students and faculty resulted in the establishment of three universities within a 6-year time period. Importantly, this dramatically reduced the cost of attending a university for Germans; equally importantly, the timing of the increased access to a university was not a result of any underlying economic change, but due to a political event within the Church.

Increased access to university training seems to have been associated with increased economic activity. Through what channel did this effect arise? We argue that training in the law was likely crucial. Roman law was a broad, and arguably ‘scientific’ system of legal knowledge that could be used across jurisdictions. It represented a considerable improvement over existing systems of customary law: the latter were often local, not written, based on notions of kinship, honour, or superstition. From the biographies of university graduates of the Middle Ages, we know that Roman legal knowledge was a skill strongly sought after by the rulers of the time. Jurists worked as chancellors, judges, arbitrators, or envoys, thereby modernising bureaucracies, enhancing tax collection, promoting trade, and strengthening state capacity.

The case of medieval Europe makes for pleasant reading – especially for academics. A new form of human capital (legal training) was discovered, elites supported investments in it by establishing universities and giving students privileges (effectively subsidising training); then, secular and spiritual lords hired the legally-trained to work as administrators, and supported contexts in which legal training was valuable (e.g., markets). However, the fact that Roman legal knowledge spread and was ultimately accepted throughout Europe should not be taken for granted. It was not inevitable.

Policy choices made by the ‘states’ of the time – both in the education sector per se, and in the labour market – were thus crucial to the success of the first universities, and the investments made in the new form of human capital that they produced. This pattern was repeated in the public support for many of America’s research universities in the 19th and 20th centuries, and it bears remembering in the 21st century.

2 Canon law was taught alongside Roman law in the universities of the Middle Ages and was very much complementary to Roman law. It was used to govern the late medieval Catholic Church, and also to adjudicate disputes. We discuss its importance in more detail in the working paper.